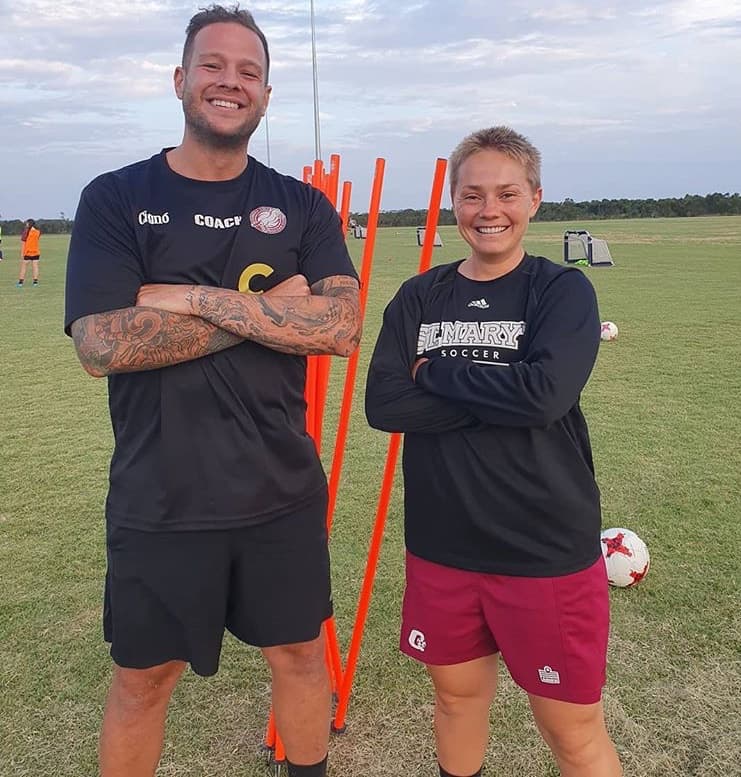 I joined the club when I was around 8 years old and I played club all the went through high school so probably until I was 18. The experience was phenomenal! At an early age, I was being developed by amazing coaches who saw I had a natural talent and understanding of the game. Without their constant support and contributions to me as a person and a player, I for sure wouldn’t be where I am today so I give much-appreciated thanks to those people. Playing club soccer also allowed me to develop friendships that continue on today even though we are miles apart. It is incredible how a simple game can shape you. I was able to travel with teammates all across the country. This allowed me to mature and become independent when I was away from my family. Without club soccer, I never would of received a college scholarship to continue on playing and practically paying my tuition. I have countless memories from playing club and I was very blessed to play with amazing girls while having strong role models around me. Like I said, without them, a lot of who I am as an individual is from all their love and support.

For high school, I was very fortunate because it was basically playing with everyone from Edge. With the one high school and one club team, we only became better under Carl Matson. He also had help from Dorvan Polson who was our club coach at the time so had had so much soccer knowledge at our disposal. Obviously, the best part was being apart of the first team in school history to win a soccer state championship. After taking the second my first two years, it was so refreshing knowing all our hard work had finally paid off and we could finally lift the trophy.

After HS, I went the Juco route which was amazing and I highly recommend it not be overlooked. I spent my first two years in Colorado at Otero Jr College where I was apart of the first women’s soccer program at the school. We had great success both years and this is where I established my blue-collar mentality which has become the foundation of who I am as a player. I would later transfer down to St. Mary’s University in Texas to finish out my degree and eligibility. For me, the best part of college was all the connections I made. I had teammates from all over the world. Little would I know that these connections would later help me out in the future as I continued to play soccer, especially when I went to England looking to play.

I also played on a WPSL team in Texas for two summers which is the second-highest league offered in the states. That was fun but for me the season was too short. I craved playing soccer 24/7 so that is when I decided to go to England and play. Unfortunately, I couldn’t stay in the country due to visa issues but I was able to train with Lewes FC which were in the second-highest league there. That was incredible playing with the girls because everyone in that culture eats, breathes and lives for soccer. Exactly where I felt at home. I become so much smarter and faster on the ball because they played at such a high level compared to the states. My soccer IQ expanded and I was able to elevate my game even though I trained with them for a short amount of time. The only downfall was I couldn’t compete which led me to hire a soccer agent which had me on a plane to my next destination, Australia.

This is where I currently am on this crazy journey of playing soccer. I have been here for a year now and played one season with Coomera Soccer Club. Of course, the visa issue appeared again but I am on a student visa now which allows me to stay in the country and play another season with Coomera. Our season starts in a month and goes until September which is exactly what I deeply craved after college. I have been given the honor to be captain this season and I am looking to build on our success from last season. I was also selected into the top 11 last season from all the teams in the league and I was awarded player of the year through the club. It has been one crazy roller coaster here but I wouldn’t change it for anything.

I still think back to that little 6-year-old girl who fell in love with the beautiful game. I never would of guessed that I would travel the world playing soccer. To me, it is so much more than a game. It is my identity and the foundation of who I am. God has blessed me so much along the way and has allowed me to continue playing through all these years. I don’t know what will happen next or where I may be in a year, but I know there will be a day when the boots with be hung up but the memories will never cease flowing. For all the other young kids who wish to play soccer professionally, I simply tell them to ‘Dare to Dream.’ You decided how far you go. There will be days that are dark and there seems like there is no hope but I can tell you from my life, you have to push through the mud with the resilient mindset of that dream coming into fruition.